Come see our garden at 11001 Midway Road. Nestle carefully in front of our bluebonnets for photos!

Have Hope, Carry On

Most everything, every event, every gathering has been cancelled in Dallas and we are under ‘shelter in place’ orders until April 3.

The Dallas County Master Gardener office is closed and our Dallas County help desk is not available at this time. If you have garden questions, send them to us in the comments area of this blog and we will try to answer quickly.

Please don’t fret, our gardens will survive and one day soon we will be welcoming you back to Raincatcher’s events, plant sales, garden classes, and garden visits.

In the meantime, look through seeds you have saved and begin planting. Seeds represent hope!

Some garden centers in Dallas are open and have pick-up service because they supply herbs and vegetables. I have an order in right now, for starts of squash, eggplant, jalapēno, green beans and hopefully sun gold tomatoes.

Starla took this picture yesterday of The Raincatcher’s Garden to cheer you.

Bluebonnets at The Raincatcher’s Garden

Bluebonnets are blooming once again along Midway. 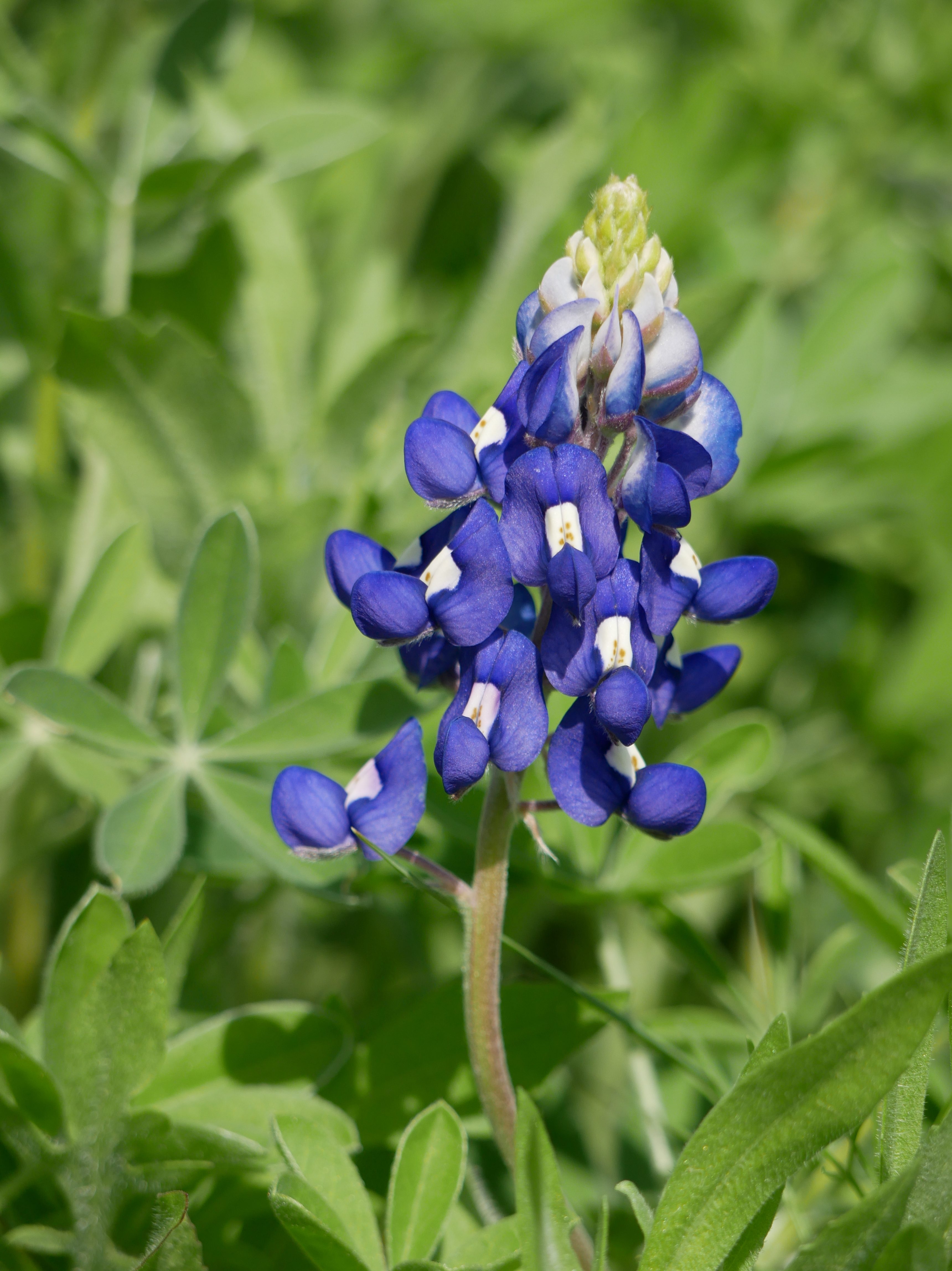 In the fall we sowed more wildflower seeds, hoping for their return.

Bluebonnets at The Raincatcher’s Garden

It’s a good year to head out on country roads outside of Dallas to see bluebonnets. Here’s a great website that gives an update on the blooms in Ennis: https://www.visitennis.org

We have written many times about bluebonnets so before you go in search of them read:

Itching in the Bluebonnet Field

Wildflowers at the Farm

And now would you please get your calendar ready for these dates:

EDUCATIONAL OPPORTUNITIES FOR ALL

Tuesday, April 30th, 11am-  ‘Planting the Edible Landscape – the Spring/Summer Collection” with Linda and Ana to share the plants chosen and the reason behind the choices. Class and tour to be provided.

Tuesday May 7th, 9-11am Turf talk and demonstration by Stephen Hudkins.
Saturday May 25th 9-11am Grapevine Canopy Management Pruning by Michael Cook
Grow and Graze Events:

August 27th… Corn, the Golden Essence of Summer, and Okra, a Garden Giant

Grow and Graze reservations will be posted approximately one month before the event.
Ann Lamb
Pictures by Starla Willis

It’s August and  I wanted to write a little something for the blog that would encourage our readers and remind them fall is coming.   Here’s Patti Brewer’s reply when everything seemed so bleak and no rain was in sight:

Well, I’m flattered you asked.  This spring we had the shortest growing season I’ve ever experienced in all these years.

We had one big flourish of zucchini and yellow squash and then  production was halted because of the intense early heat  and lack of rain out west of Ft Worth where I veggie garden. This area is not the same growing zone as Dallas!
Squash plants were babied when the spring would not come and covered  up when a freeze came through in late April; then the heat came with a vengeance. Plus I am ruthless for “squashing” the squash bugs and their eggs that always appear. I am blaming the limited squash harvest on the on the heat and lack of rain.
Patti, we agree it’s not  your fault!

The only thing we are harvesting  now is jalapeños and Serrano peppers. Bell peppers are struggling. We usually get our most productive harvest of peppers in Oct and Nov.

It was 111 degrees one weekend in July!   We are sandy loamy soil. So you can imagine how things are barely hanging on in the veggie garden.

Blooms on a Regenerated Spring Tomato in 100 degrees-August 2018

I am trying to regenerate about half of our spring tomato plants. I will sprinkle our homemade compost on the tomatoes and peppers this weekend because it is getting down in to the low 70’s

We are not on a drip irrigation system in the garden. I have mulched and mulched again which has helped. We were a failure at beets. Not sure why. I do have a loofa growing on supports that the English peas were growing on in the early spring, But It hasn’t bloomed yet.

For the fall we always plant the following: mustard and turnip greens, garlic, spinach, turnips and kale. Sometimes we don’t plant the spinach or kale till November.

I will be planting a new area for wildflowers in September. I have harvested many wildflower seeds from this past spring! Just hope we get the rain for those to germinate. Our farm locate west of Weatherford is experiencing big time drought. 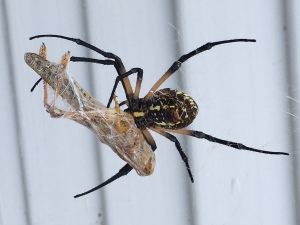 My  recent video of a hummingbird hawk moth and a picture of an Orb spider mummifying a grasshopper have been our entertainment. All from out here in Palo Pinto county!!

Patti, did you get any rain in the last week?

Yes!!! As of August 19th, we have received almost 3 inches!!  I’m seeing my bluebonnets sprouting!! I have a new seeded wildflower plot that is 20 X 25 feet. That makes me happy. Loofah is vining like crazy. Still waiting on it to bloom. Tomatoes and peppers have so many promising blooms!!  I have a few tomatoes on the vine too!!

Temperatures although mostly still in upper 90s with lows in the low 70s are making my garden happy. Black eyed peas are up along with mustard and turnip greens. Kale is up because I shook the dried seeds from my kale plants from last winter! Previously planted in the summer was zipper cream peas and black eyes. They look great now and I picked some even. I planted Blue Lake Bush green beans yesterday.

Rain was very important for our entire place. Fall is my most favorite season!!

Wildflowers at the Farm!

First of all, I need to confess this is not my farm and these are not my pictures or Starla’s.

Patti Brewer from the Master Gardener class of 2012 took these pictures and runs the family farm pictured below with her husband and family.

Patti, where is this crazy beautiful place?

The farm is in Lone Camp, Palo Pinto county, Texas.   Palo Pinto county is the beginning of the northern hill country.  I am not sure of our farm’s exact date of purchase but my mom who was born there would be 100 years old this year. Land was purchased at different times and some of it was owned by my great grandparents. Some of the land was partitioned to their sons and daughters including my grandfather.

Your farm is meaningful to your family but also important in terms of habitat. Who shares your farm?

Wild life on this farm include turkey, dove, deer, aoudad-or Barbary sheep, coyotes, cotton tail rabbits, roadrunners, hawks, buzzards and skunks. Of course, we have rattlesnakes and copperheads.We occasionally see horned toad lizards and have a decades old hill of red ants that stretches as wide as my outstretched arms reach. Red ants are  #1 on the diet for horned toads. We have Texas spiny lizards too. Birds we see are hummers, house wrens,  cardinals, blue jays,tufted titmouses, chickadees, meadowlarks, whippoorwills,  and owls. We have once or twice seen painted buntings. In the area are habitats of golden cheeked warblers, an endangered bird.

We have 5 tanks on the ranch and seasonal creeks and a rocky canyon area where the aoudads hang out.

Patti,  Could you tell us about the barn?
The barn used to hold livestock feed bags.  A hand cranked dried corn shucker driven by gears was in barn until it was stolen. Field corn was grown by my grandfather for supplements for cattle and chickens. It was fun to crank that old thing. The corn shuck was ejected when the kernels all popped off!

What about the wildflowers. We are drinking them in!!! Just gorgeous!

These pictures are from March/April 2017, when we had a trifecta of blooms at one time.

Bluebonnets, pink phlox, orange Indian paintbrush and crossvine on the fence.
This year we only had phlox and bluebonnets at the same time, but amazingly thick stands of bluebonnets.

Bluebonnets, we can’t get enough!

More about the wildflowers:  we do not mow any bluebonnets until seeds are thrown out. The first mowing of the bluebonnets occurs usually right before July 4th. Mowing continues through about late August if  needed. Texas heat burns everything up by August.  Harvested bluebonnet seeds are given to friends. If you have never been in a field of bluebonnets that are throwing off their dried seeds, then you are missing something to behold.  What you hear sounds just like popping popcorn on the stove.  The first time I heard this I thought a rattlesnake was very close to me in the knee high bluebonnets!

The Indian paintbrushes are mostly in pastures that we don’t mow. Unfortunately, our cows  eat the Indian paintbrush that grow in their pastures.  About May or June every year we have another field that sprouts  Indian blankets and then that field is not mowed until the seeds are dried on the plants.  We  have an abundance of antelope horn milkweed and some butterfly weed and I have planted frost weed for years.
We  see a tremendous variety of butterflies including Monarchs.  Bumble bees and honey bees are busy at our farm. Sitting outside on a summer evening listening to the hum of the honeybees is one of my favorite things to do.

There is so much possibility in a seed, except if you leave your seeds sitting on a counter, or in the garage, or in your imagination.

Poppy seeds should be planted now. At the Demonstration Garden ours flourished  in the less tended, driest soil. Poppy advice from the Dallas Morning News here.

And don’t forget to sow Bluebonnet seeds.   You may recall  we promised to prompt you to plant  Bluebonnets.

Oh dear, some of my dried Larkspur stalks from last spring are still sitting in my garage with viable seed.  This is a reminder to me as well!

Time is of the essence.

On April 20th a short one hour drive from Dallas to Ennis, Texas brought us to beautiful Bluebonnet fields.”The bluebonnet is to Texas what the shamrock is to Ireland, the cherry blossom to Japan, the lily to France, the rose to England and the tulip to Holland.” (quote by Jack McGuire)

To get this field of blue, you have to plant seeds in the fall when spring thoughts are  distant. If you need a little reminder, we will be happy to oblige.  In October we will remind our readers to plant Bluebonnet seeds.

And remind you to purchase a field.

And to paint  the gate.