Tag Archives: spinach and kale in the garden

It’s August and  I wanted to write a little something for the blog that would encourage our readers and remind them fall is coming.   Here’s Patti Brewer’s reply when everything seemed so bleak and no rain was in sight:

Well, I’m flattered you asked.  This spring we had the shortest growing season I’ve ever experienced in all these years.

We had one big flourish of zucchini and yellow squash and then  production was halted because of the intense early heat  and lack of rain out west of Ft Worth where I veggie garden. This area is not the same growing zone as Dallas!
Squash plants were babied when the spring would not come and covered  up when a freeze came through in late April; then the heat came with a vengeance. Plus I am ruthless for “squashing” the squash bugs and their eggs that always appear. I am blaming the limited squash harvest on the on the heat and lack of rain.
Patti, we agree it’s not  your fault!

The only thing we are harvesting  now is jalapeños and Serrano peppers. Bell peppers are struggling. We usually get our most productive harvest of peppers in Oct and Nov.

It was 111 degrees one weekend in July!   We are sandy loamy soil. So you can imagine how things are barely hanging on in the veggie garden. 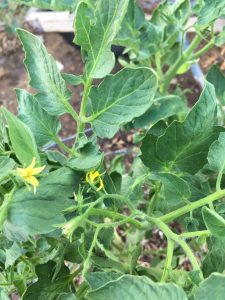 Blooms on a Regenerated Spring Tomato in 100 degrees-August 2018

I am trying to regenerate about half of our spring tomato plants. I will sprinkle our homemade compost on the tomatoes and peppers this weekend because it is getting down in to the low 70’s

We are not on a drip irrigation system in the garden. I have mulched and mulched again which has helped. We were a failure at beets. Not sure why. I do have a loofa growing on supports that the English peas were growing on in the early spring, But It hasn’t bloomed yet.

For the fall we always plant the following: mustard and turnip greens, garlic, spinach, turnips and kale. Sometimes we don’t plant the spinach or kale till November.

I will be planting a new area for wildflowers in September. I have harvested many wildflower seeds from this past spring! Just hope we get the rain for those to germinate. Our farm locate west of Weatherford is experiencing big time drought.

My  recent video of a hummingbird hawk moth and a picture of an Orb spider mummifying a grasshopper have been our entertainment. All from out here in Palo Pinto county!!

Patti, did you get any rain in the last week?

Yes!!! As of August 19th, we have received almost 3 inches!!  I’m seeing my bluebonnets sprouting!! I have a new seeded wildflower plot that is 20 X 25 feet. That makes me happy. Loofah is vining like crazy. Still waiting on it to bloom. Tomatoes and peppers have so many promising blooms!!  I have a few tomatoes on the vine too!!

Temperatures although mostly still in upper 90s with lows in the low 70s are making my garden happy. Black eyed peas are up along with mustard and turnip greens. Kale is up because I shook the dried seeds from my kale plants from last winter! Previously planted in the summer was zipper cream peas and black eyes. They look great now and I picked some even. I planted Blue Lake Bush green beans yesterday.

Rain was very important for our entire place. Fall is my most favorite season!!