Bletilla striata, the easy to grow, terrestial orchid belongs in your garden.

Plant these bulbs in dappled shade and moist, but well drained soil. Add mulch. Although Chinese Ground Orchids are easily cared for and somewhat drought tolerant, they will not flourish in dry conditions so try to water before they become dry. 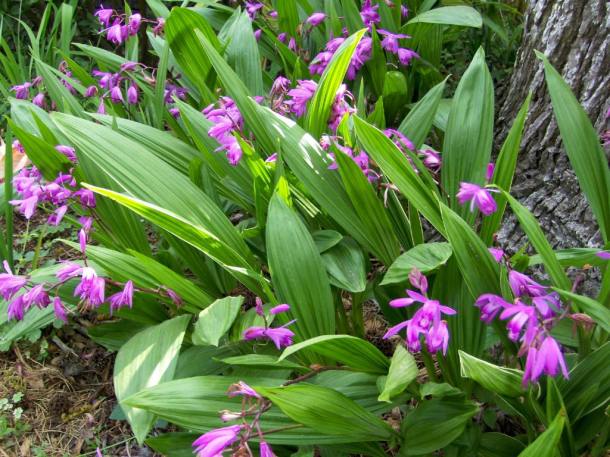 The blooms come in several shades of lavender, hot pink, yellow, and white. Each stem can have as many as 10 blooms!

After the flowers collapse, Dr. Dotty Woodson suggests cutting the seed pods off  because they don’t naturally germinate in our climate but will germinate in a laboratory situation. Remember our trip to Dotty’s orchid greenhouse?

If you are curious, throw the seeds in one of your pots to see if you can get them to grow and if they do, let us know.

The good news is they will multiply vegetatively,  so expect ever increasing clumps.

Have I mentioned the pleasing foliage?  It is longitudinally pleated  or striated; growing  upright about 1 1/2 feet high.  A variegated form can be found, that Dotty says is awfully pretty. In our climate, the foliage is deciduous.

The lavender Bletilla striata blooming in our spring garden and pictured a few days ago came from Jim.

And on a serendipitous note;  while some of our gardeners were on a scavenger dig, they potted up several mystery bulbs. Now that the bulbs are at our garden, some think it could be another stash of Chinese Ground Orchids!

Last fall, we decided to plant naturalizing bulbs and see how they fared.

In a word: gorgeous.

In December, we tucked in about 100 reliable, low-water beauties that are recommended varieties for Dallas. Now we are checking the north field compulsively to see what’s up and blooming.  We haven’t been disappointed.

Steve Huddleston, senior horticulturist at the Fort Worth Botanic Gardens, has found selections from the jonquil and tazetta families of smaller, multi-flower daffodils are the most dependable for years of color. Huddleston is slated to speak on “Perennials and Bulbs” for the Master Gardener School Class on March 28. 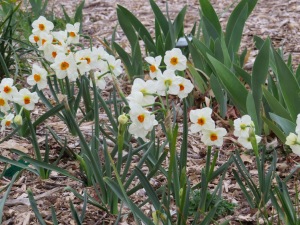 ‘Cragford,’ a pre-1930 Heirloom with white petals and reddish orange cups falls in the tazetta classification. The first to bloom in our garden, it grows to 14” -16.” 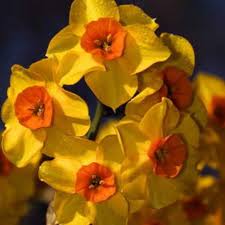 ‘Falconet’ is another dazzling tazetta with three to five flowers per stem. The petals are a bright gold with a rich orange cup.  Like ‘Cragford,’ it has a nice musky sweet perfume.  Other tazettas you might try are ‘Avalanche’ and ‘Geranium.’  We also planted ‘Hillstar,’ a jonquil variety which is not yet in bloom. 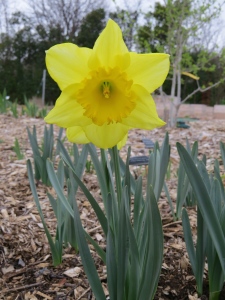 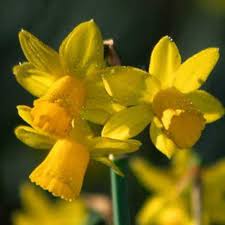 Inspired? All our bulbs came from Brent and Becky’s Bulbs, one of the country’s respected bulb retailers. The Raincatcher’s Garden receives a portion of your order at the company’s fundraising site Bloomin’ Buck$ (www.bloominbucks.com).  If you’re looking for summer bulbs for your garden, Brent and Becky’s carries elephant ears, ground orchids, and more.

Pictures by Starla and courtesy of Brent and Becky’s Bulbs

What’s in a name? That which we call a rose by any other name would smell as sweet.

Picture the flower: daffodil, jonquil, narcissus.  If you are like most people, probably a particular flower comes to mind.  However depending in which part of the country you grew up or lived, or even your age, the specific flowers associated with each of these terms may be different.  This confusion, when using common names for plants, is why botanists classify plants using their Latin or scientific names.

So what exactly is the difference between a daffodil, a narcissus, and a jonquil?  The simple answer, according to University of Illinois   Extension specialist Jennifer Schultz Nelson,  “is nothing, or “it depends.”  All three terms are used as common names in many cases and used incorrectly.  Narcissus is technically the only correct scientific name identifying the genus of this group of plants.  It is not a common name, though some use it as such.  Daffodil is typically used as a collective name for all these plants, but is more often used to describe the larger flowered types.  Jonquil is a name sometimes used for this group as well, but actually only applies to a very small subgroup, Narcissus jonquilla and related hybrids, which typically have several small, fragrant flowers on each stem with flat petals.  The foliage is very narrow and reed-like, according to the American Daffodil Society (ADS).” 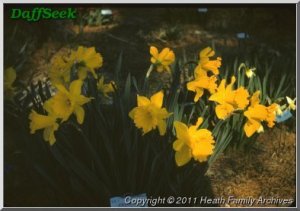 The American Daffodil Society (ADS) designates 13 divisions of daffodils with, depending on which botanist is asked, over 40 to 200 different daffodil species, subspecies and varieties of species and over 25,000 registered cultivars or named hybrids.  Daffodils are members of the Amaryllis family, of the genus Narcissus.  Narcissus is derived from the Greek word narke, meaning numbness or stupor.   Perhaps the name was given because in Greek mythology Narcissus was a young man so enamored of himself that he stared at his reflection in a pool of water until he eventually drowned as he tried to embrace himself.  Supposedly flowers grew up around the site.  Or the name Narcissus may refer to the flower’s intoxicating fragrance, or because all parts of the daffodil are poisonous.  In fact, not only animals but even humans who have occasionally mistaken a daffodil bulb for an onion, have become ill upon eating the bulb.  There is even a contact dermatitis called “daffodil picker’s rash” which can occur upon repeated handling of the stems. 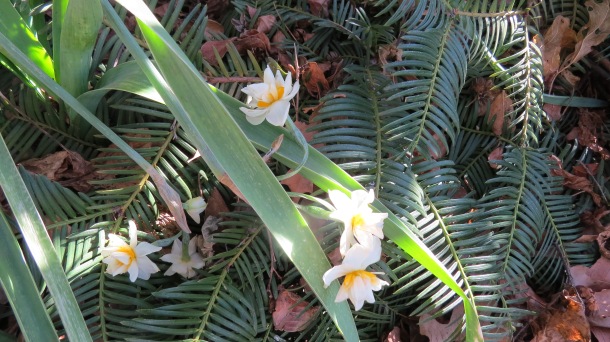 Above: Narcissus tazetta Double Roman peeking our thru leaves of our yew at The Demonstration Garden

Daffodils found growing wild in Texas around old homesteads or cemeteries were probably brought over here from Europe by early settlers, according to Dr. Jerry Parsons, retired AgriLife Extension Horticulturist. Daffodils will grow best in a well drained area in full sun though they can naturalize in part shade under deciduous trees.  The bulbs should be planted and divided in the fall or late summer.   It is extremely important that the foliage be allowed to grow, mature and ripen naturally.  According to Dr. Parsons, it should never be cut off or “tied in cute little knots.”  It is the foliage that stores up the food reserves for the next year’s blooms and new bulbs.  In a flower bed, the withering foliage can be disguised by other plants. 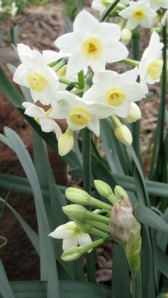 Narcissus tazetta ‘Grand Primo’, a bulb that will naturalize in Texas

To naturalize daffodils in Texas, it is important to plant the correct varieties.  In general, according to Dr. Parsons, Southern grown stock is genetically superior in vigor to the commercial Dutch forms.  His article on daffodils in Plant Answers lists some of his favorite varieties.  Another excellent source for bulbs of all kinds collected from Texas and neighboring states is The Southern Bulb Company www.southernbulbs.com.  The owner, Chris Wiesinger, collects heirloom and sometimes rare bulbs that will perform very well for the warm-weather gardener.  Many of the daffodils and bulbs planted at the DemonstrationGarden have come from his stock.

So, whether you call them daffodil, narcissus or jonquil,

now is the time to enjoy these delightful flowers.

Picture of ‘Double Roman’ and ‘Grand Primo’ by Starla

Take in all things Daffodil at The Annual Texas Daffodil Society Show  this weekend at the Dallas Arboretum.

Spring Is Coming To Dallas!

If you’ve never been thrilled to the very edges of your soul by a flower in spring bloom, maybe your soul has never been in bloom.  — Terri Guillemets

Please don’t take this quote harshly, enjoy these pictures of spring blooms from our garden.  If you have never been thrilled to the very edges of your soul by spring blooms, maybe today is the day!

Pale blue blooms of Rosemary in our Entry Garden: 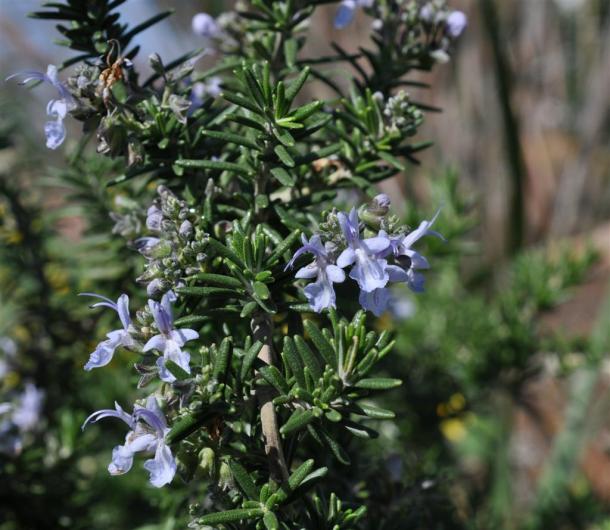 Narciuss Campernelle. This narcissus  has a fragrance so sweet, they are also known in East Texas cirlces as “sweeties”. 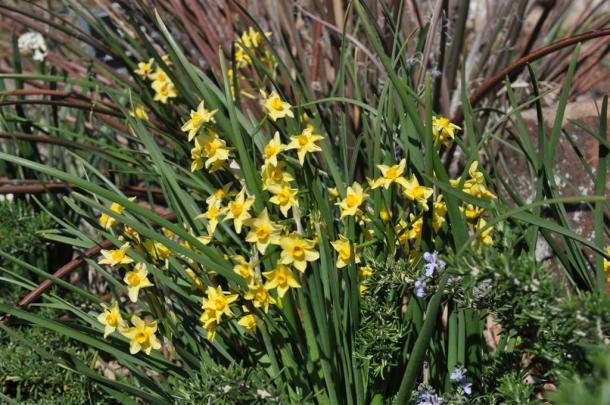 Narcissus Grand Primo faithfully blooms every year and muliplies into larger and larger clumps to enjoy.  Our bulbs are from The Southern Bulb Company in Golden, Texas.  These Heirloom bulbs are the equivalent of a  ‘slam dunk’ for gardeners. Plant them in the fall.  They will make points for you each spring. 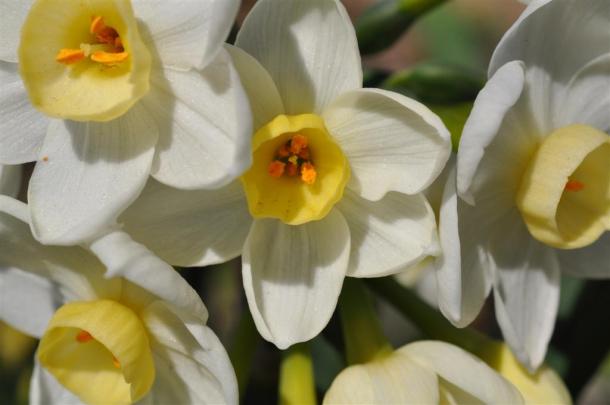 On New York runways this fall, the trendy color is oxblood.  You will see leather jackets, wool pants, purses, and boots drenched in oxblood.   Last spring the color was tangerine tango, next year it might be beechnut  green.

Not to be out done by the fashion world, Texans have been enjoying Oxblood Lilies (Rhodophiala bifida) for over 150 years. Think back in Texas history to the 1840’s when German settlers immigrated to Central Texas for the early cultivation of this bulb.  Like these settlers, Oxblood Lilies are tough and tenacious and thrive all over the Central Texas area on old farms and abandoned homesteads. 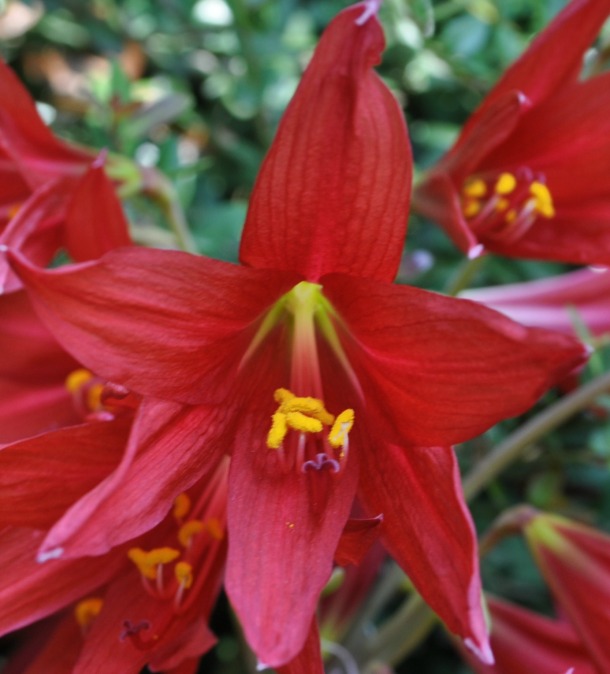 Unlike fashion dictates for 2012, the oxblood lily will endure for generations and mulitply.  Plant them in part shade or full sun. The red blooms are short lived but will last a little longer with afternoon shade.  They bloom in early September following rain and are also known as School House Lilies.  After the flower dies; thin, deep green leaves will continue until early summer.

For a small investment, your garden can enjoy the bright hues of the Oxblood Lily.  Plant them in the fall through December 1.  Next year what people are wearing will change but your garden will always be in style. 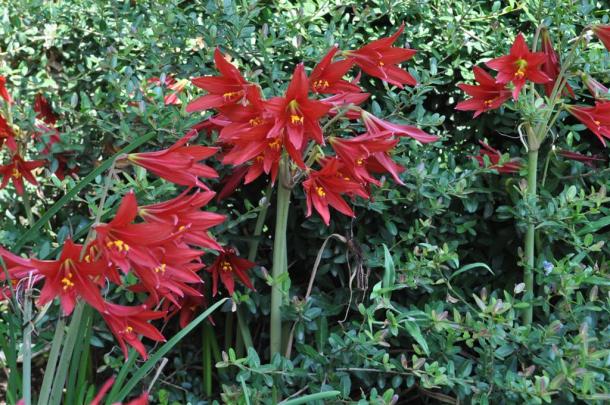