The “Mild” Habanero And The Eggplant

Never take your daughter with you to buy vegetable transplants. Molly seemed like a safe bet; this 24-year-old hasn’t cooed over anything but boyfriends and clothes since she turned 11. But show her the 4-inch veggies all waggling their cute little leaves and begging to come home with you, and don’t you know it, Molly’s like a preschooler with a batch of free puppies.  She wanted them all.

That’s how we ended up with The “Mild” Habanero and The Eggplant. 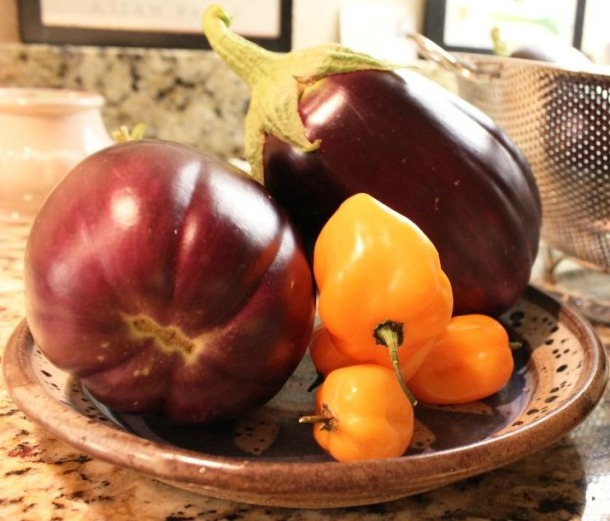 For the summer garden, we planted squash, cantaloupe, and watermelon seeds and transplants of tomatoes—plus the habanero and eggplant.  Now two months later, the cantaloupe seeds never sprouted, beetles decimated the squash and watermelon, and the tomatoes have decided that it’s too hot to do much of anything.

Of course, the habanero and eggplant have thrived.

The tag on the habanero read “mild”—as compared to what? A ghost chili?  And you’ve never seen a more prolific pepper; at least 25 chilies in shades of green, yellow, and orange hang from its branches.  Perhaps one could blend up a concoction of chilies and vinegar strong enough to repel squirrels or wayward cats, but otherwise the peppers are too hot to use in anything. 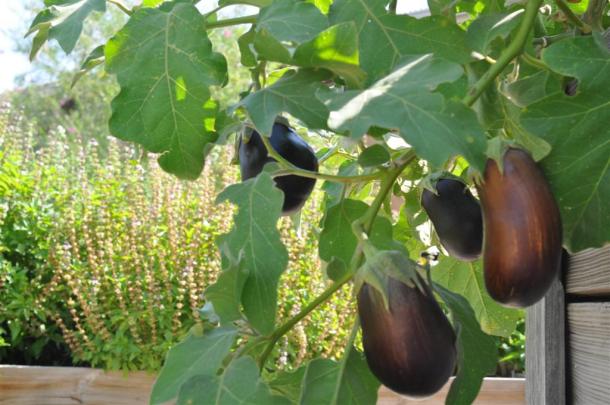 The eggplant is now the size of a small shrub.  At least six of the most beautiful aubergine purple globes dot its sturdy branches.  Eggplants are much loved by cooks; the English and French call them aubergines.  Crayola even named a pink-purple-grey color crayon eggplant in 1998.

In my kitchen, I have grilled, fried, stewed, stuffed, and rolled eggplant—all with the same conclusion.  I don’t like eggplant.  I tried, but no.

So, here we have it.  The stars of my August garden are inedible or underappreciated. Perhaps I could put a little vegetable stand out by the mailbox with an honor system jar for quarters.  Habaneros and Eggplant—Name Your Price…