More About Fall Color in Dallas 2018 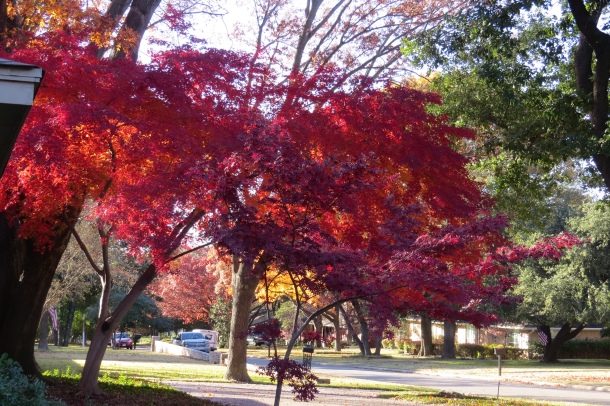 Nashwa Bawab-Dallas Observer | NOVEMBER 29, 2018
The trees in North Texas are brighter and more colorful than ever — or at least that’s what some Dallas residents have determined.

Dallasites on Facebook have taken notice of the colorful fall foliage, with one poster saying, “All of that rain must’ve helped because I’ve never seen such pretty autumn leaves in Texas as I have this year.”

Another commenter said, “This year has been the prettiest of the 13 years we’ve been here.”

While that’s all conjecture, Daniel Cunningham, horticulturist with Texas A&M AgriLife Extension and self-proclaimed “Texas Plant Guy,” said Texans taking notice of brighter colors might be onto something.

“In North Texas, we don’t always have a fall so it’s good to enjoy that this year.” – Daniel Cunningham, Texas A&M AgriLife.“Typically we see some of the best fall foliage in years that have wet growing seasons followed by less precipitation in the fall, but that’s kind of the opposite of what we experienced this year,” Cunningham said. “We had extreme drought during the summer and then we got all that record rainfall in September and October — but we have experienced cooler weather recently.”

Cunningham explained that cool weather helps to break down the chlorophyll — that’s the green pigment in plants — allowing the yellow and orange pigments to shine through. When temperatures reach just above freezing, it increases anthocyanin formation, and that pigment produces the red and purple leaves.

The rain storms that plagued North Texas recently may have also helped the trees keep their leaves longer, giving them more time to change colors for all to see.

A commenter in a Facebook thread of Frisco residents comparing North Texas’ fall leaves with the colors of Northeastern fall leaves said, “As a lover of all things fall and someone who finally did a fall foliage trip a couple of years ago, it really is stunning this year.”

Cunningham said that autumn is the best time to plant trees in Texas as well as the perfect excuse to head over to a local tree nursery.

It’s great people actually care about the colors of trees because I think sometimes people are interested in pretty flowers and the colors they can bring but sometimes forget trees,” he said. “In North Texas, we don’t always have a fall so it’s good to enjoy that this year.”

Another Facebook user said, “It’s gorgeous if you take side streets to your destination wherever that may be just to see the foliage.”

“Folks, get outside and enjoy it,” he said. “Whether you do that by walking in your neighborhood or hiking around DFW, do it because we probably only have two more weeks of this lovely fall color to enjoy.”

Thank you to the Dallas Observer and Nashwa Bawab  for allowing us to print this story.

Click here for tree  suggestions to plant now that will be rock stars next spring, article by Daniel Cunningham

Dallas County Master Gardeners growing and sharing from The Raincatcher's Garden.
View all posts by Dallas Garden Buzz »
← Fall Color in Dallas 2018
Shopping For Seeds for Next Year’s Garden →