RSS Feed
← A Walk Around The Garden
Grow and Graze, Herbs of the Mediterranean →

Sometimes a problem caused by carelessness can be solved while teaching a useful lesson.

There is a blackberry patch in the Raincatcher’s garden. Blackberry jelly is a real treat.  The first step in making blackberry jelly is naturally—picking the berries.  This isn’t quite as easy as it might seem but gardeners are tough and volunteer to do the picking. 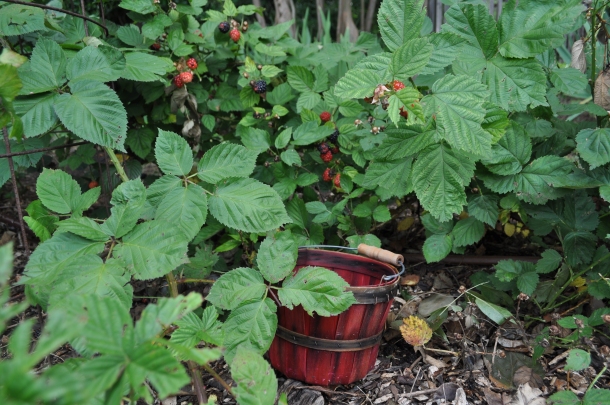 Above: Blackberries ready to pick at Raincatcher’s

So, with a sturdy stick and rosetender gloves I, one of the tough volunteers, was able to pick a full bowl of nice ripe berries. I took off the gloves and laid down the stick and prepared to sack up the harvest—of course—I spied a whole cluster of ripe berries in the very center of a vine.  I had to add these to the bowl and felt pretty sure I could carefully grab them—which I did—but then my berry  filled hand got caught in the thorns and ripped a strip of skin. 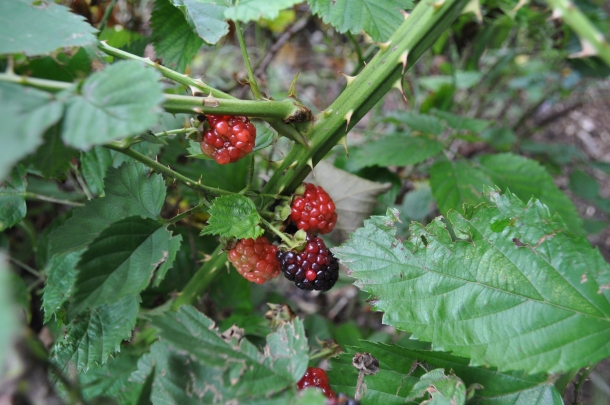 Above: Blackberries and their thorns

How could thorns cause such a wound—it was bleeding a surprising amount—blood running down my arm. Yikes, I was there alone so this was a problem to solve myself.  I was just thinking I would have to use my shirt to apply pressure when I remembered that yarrow has been traditionally used to stop bleeding.  The garden has plenty of yarrow so I picked a bunch of leaves and held them to my thorn wound.  Amazing!!  The bleeding stopped—and my hand felt much better. 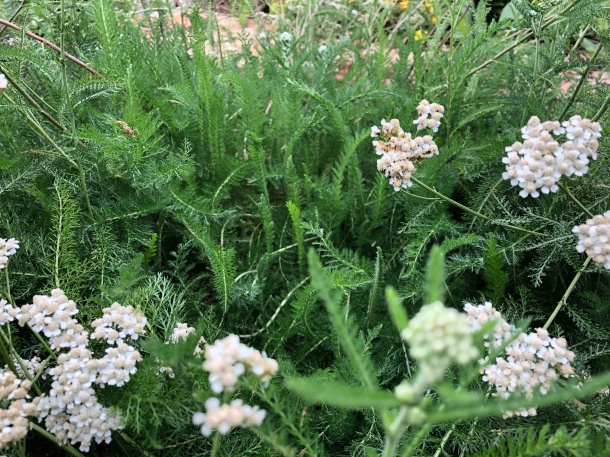 Above: yarrow leaves used to treat a wound

When I got home I looked carefully at my hand. There was no blood seeping at all.  This called for a bit of investigation.

The true name for common yarrow is Achillea millefolium. Millefolium means thousand leaves—makes sense—but why achillea?  The hero Achilles from Greek mythology is said to have used this herb to treat the wounds of soldiers in the Trojan war.

Now the truth of this is lost in the mists of time but— scientific studies have found an alkaloid—achillene—that facilitates blood clotting and activates blood platelets.

Now we do not practice medicine in the garden nor would we ever recommend using plants in place of medical advice and/or treatment. Its also very important to be sure of a plants identity before applying it to your skin.

That said—its also good to find out how plants have been used and valued by our ancestors. Plants are amazing and powerful—not just pretty.  The traditional wisdom of using yarrow to stop bleeding was a lesson learned.  Of course the other lesson—don’t think you are smarter than a blackberry vine!

Dallas County Master Gardeners growing and sharing from The Raincatcher's Garden.
View all posts by Dallas Garden Buzz »
← A Walk Around The Garden
Grow and Graze, Herbs of the Mediterranean →