Pomegranates at The Raincatcher’s Garden

The orchard was one of the first things planned when we started up at Raincatcher’s garden of Midway Hills.   Six different trees were chosen and then planted in  January 2015.  Most of these were purchased, but the pomegranate was brought over from our previous location. One of the things about planning and planting an orchard is to realize that it usually takes 3 years for the trees to bear fruit.  So we planted, pruned, and then waited.   The first season was as expected – we could see the growth pattern of the different trees, but there was no fruit.

Our Very Own Pom Transplant

The winter came, and the trees lost their leaves and once again we waited till early February – and we pruned according to the type of tree – pears wrap around and grow vertically, while plums and peaches are pruned to a bowl type shape.

The last 2, persimmon and pomegranate, are more shrub-like and were not touched by the pruners.   They were about 2-3 feet tall at this time.

By March new growth was appearing and the effects of pruning was taking shape — a few blossoms appeared on the plums and peaches, but fruit did not follow. The pomegranate, however, was a different story – it began to grow, — and then blossoms appeared in March and April with this beautiful orange bud which then became a flower – the bees came to pollinate ,  and then fruit started to form.  The shrub is now over 5 feet tall and is laden with beautiful orangey pomegranates  -Yes  it’s only the second year, but we will have pomegranates in the late Fall. 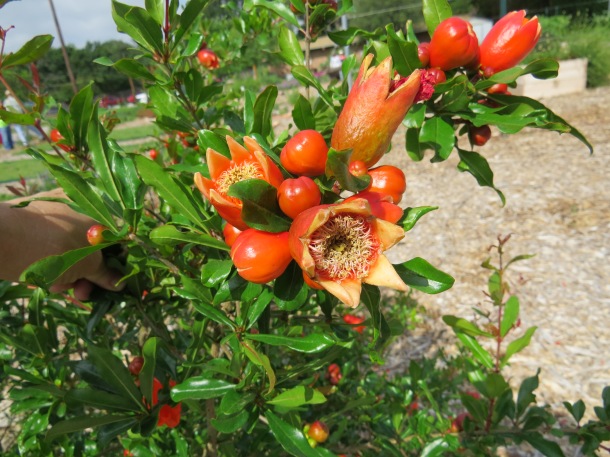 Pomegranates are ready to harvest about 6 months after the flowers appear, so come later October or November our pomegranates will be ready. They should be the size of an orange and the color will vary from yellow to bright red.     We are looking forward to  celebrating this harvest by making some pomegranate jelly !

Dallas County Master Gardeners growing and sharing from The Raincatcher's Garden.
View all posts by Dallas Garden Buzz »
← Gardening By The Yard
A Musical Squash for the Edible Garden →