The Case for Cilantro

Ina Garten (aka the Barefoot Contessa) says she despises it.  Others say the taste reminds them of dirty dishwater.  Some claim a soapy taste when they chew on it.  How could it be, then, that guacamole wouldn’t make it to a true “TexMex” table without a hefty amount of cilantro mixed in?  And salsa without cilantro?  Not in TEXAS! While there are clearly two sides, the “lovers” and the “haters”, consider these facts before arriving at your own verdict.

Cilantro, Coriandrum sativum, a member of the Apiaceae (Umbelliferae) family has been cultivated as a medicinal and culinary herb for more than three thousand years.  Mentioned first in Egyptian papyri and the Bible, Spanish conquistadors introduced cilantro to Mexico and South America where it quickly became associated with that cuisine.  Also known as Chinese parsley, the herb has a long history in Chinese medicine and cuisine.  One of the ancient uses was as an aphrodisiac. 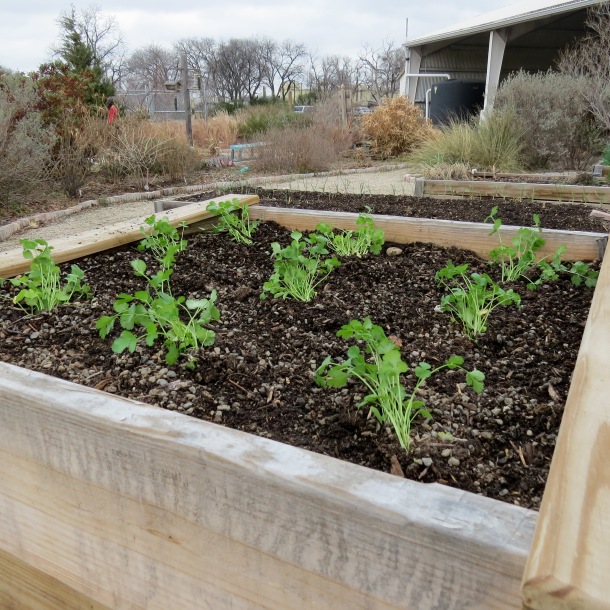 Cilantro likes loose, rich, well-draining soil.  Sow seeds in the fall ½” deep, thin seedlings to 1 foot apart.  Plant seeds again in February to give your cilantro time to grow before it gets too hot. If you can find it,  choose variety “Long Standing” for its excellent flavor, improved leafiness and, as the name infers, its slow-to-bolt quality.

Cilantro  needs full sun and occasional watering if the weather is dry.  Transplants can be put in the ground anytime throughout the fall and winter.  A succession of crops will help your cilantro last longer.  To harvest cilantro, cut the stems down to the ground, a small section at a time.  When cilantro gets ready to flower, it sends up leaves that are lacier and smaller.  The seeds of the cilantro plant are known as coriander.   An aromatic spice, try using coriander in sweets, cakes, breads, and to flavor liqueurs.

Every part of the plant is edible.  Cilantro’s  flat and gently serrated dark green leaves, resembling Italian parsley, are best used when the plant is about 6 inches high, and they must always be used fresh.  Toss them into almost any salad.  You can use cilantro anytime you would use parsley.  Make a pesto out of it just as would basil and freeze it for future use.  Store a bunch of cilantro for about a week in the refrigerator in a jar of water loosely covered with a plastic bag.  (Remember to change the water every few days.)

The flowers make an attractive bouquet or addition to other garden flowers for cut arrangements.   Use it to settle the stomach and encourage good digestion.  Or do as the Chinese, use it in a “love potion” which they believed led to a long life.   While true, its unique aroma and pungence often demand an acquired taste, once you acquire the taste for it cilantro can be addicting!  Finally, just be thankful that when summer tomatoes and peppers are beginning to ripen  and cilantro may no longer be found in the garden, a quick trip to the grocery always keeps it within reach.   Case solved!

Note:  Over the next few weeks we will be sharing some of our favorite “cilantro” recipes with you.

Posted in Herbs To Grow In Dallas, Winter and tagged Cilantro, dallas gardens, garden recipe, Herbs to Grow and Use in Dallas. Bookmark the permalink.