One of the joys of winter is to sit down with a cup of tea or hot chocolate and thumb through garden books and catalogues.   Visions of a riot of color from  gorgeous flowers (does it really matter that my yard is shaded by many tall trees and the descriptions say “full sun”) and bountiful vegetable harvests (surely there is a shade tolerant tomato) always seem to intoxicate me into ordering or purchasing many more seeds and products than any reasonable person needs or can use.  Of course, most of the sunny place flowers struggle, get lanky, then die a slow death in the shade of my yard; and, so far, I haven’t discovered a shade tolerant productive tomato.  Yet spring holds such promise, and occasionally I find a particular variety of full sun plant that tolerates shade, that I forget the failures of last year and try again.  After all, some experiments turn out well.

For the past two years the Garden’s vegetable guru, Jim,  has experimented with the “trash can” method of planting potatoes.  If you are not familiar with this method there are several  YouTube videos showing literally pounds and pounds of potatoes being harvested from potato sets planted in 30 gallon trash cans.  To construct a “trash can” potato bin, a drainage hole is made in the bottom of a plastic trash can, Seed potatoes are planted at the bottom of the can in a few inches of soil, then as the potato plants grow to about eight inches tall enough soil (in the Garden’s case, the Garden’s homemade compost) is added to cover them half way up the stem.  At the end of the season, the trash can is dumped and the potatoes are harvested.  An easy way to grow potatoes?  It certainly sounds like it.  However Jim reported that in the first year’s experiment, the Garden’s trash can potatoes rotted.  Guessing that perhaps there wasn’t enough drainage, the second year Jim tried putting 2” drainage holes around the side of the can.  Once again, though the plants themselves were huge and vigorous since they were growing in all that compost, the actual potato yield was small and many of the potatoes continued to rot.

A failed experiment, perhaps….  however one always learns something.  Jim surmised that perhaps the problem was that the potato plants were not getting enough sun.  Potatoes need full sun and the opaque trash can shaded them unless the sun was directly overhead.    It wasn’t until months later when the plants grew over the top of the can that they were in full sun throughout the day.

So, this year, the Garden is trying two methods to grow potatoes.  The first, in the garden’s raised bed, is the usual “trench method” where a trough about 6”-8” deep and about 4” wide is dug.  Seed potatoes that have been cured and dusted with sulfur are planted about 12”-15” apart and covered with about 4” of soil.  As the potatoes sprout, the soil is “hilled”/backfilled around the stems since potatoes grow in the space between the seed potato and the surface of the soil. 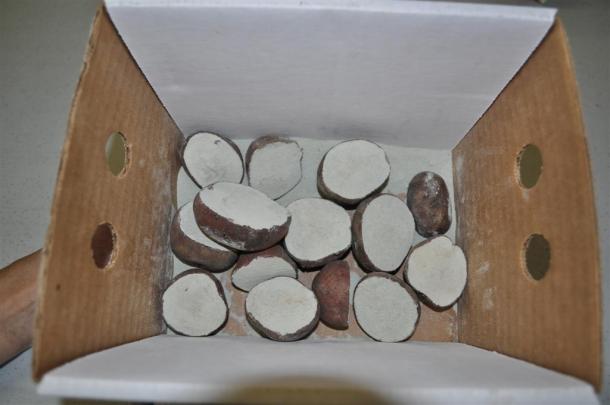 The second experimental method being tried is Jim’s homemade 2’x2’ potato bin constructed from 1”x6” treated lumber (one can also use untreated lumber or cedar).  As the potatoes plants grow to about 12” tall, another 6” panel of lumber will be added to the bin and enough soil added to bury 1/3 of the plant. 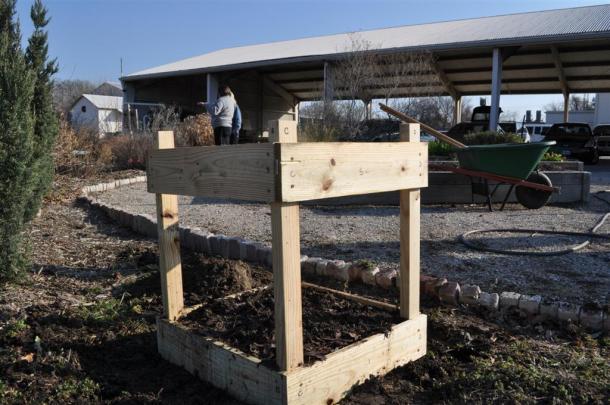 The advantage to this type of bin as opposed to the trash can method will not only be increased drainage but also the potato plants will be able to receive full sun throughout the day since more panels can be added as the potato vines grow taller.  Will this method produce a better crop of mature potatoes?  Who knows….. but that’s the fun of experimenting.

There are many other methods (potato bags/wire bins lined with newspaper/etc) used to plant potatoes.   Do you have a favorite method for planting potatoes?   If so, let us know.  This year in my community garden plot, I plan to try “laundry basket” potatoes:  cutting out the bottom of a plastic laundry basket and using it like a cage to hold the mounded soil around my potatoes.  If it works, I’ll let you know the results.  If not, I’ve only lost several small seed potatoes plus three dollars to purchase three laundry baskets from the Dollar Store.  So tell us your method— and Happy Experimenting!!