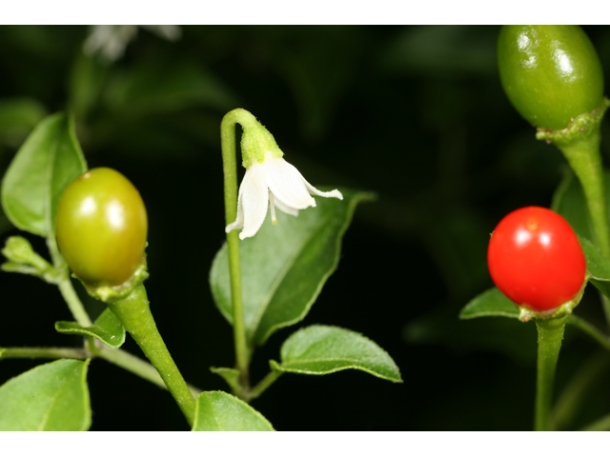 Most people know of Thomas Jefferson (1743-1826) as the main author of the Declaration of Independence and that he was the third president of the United States.   However we gardeners know that he was also an avid gardener who collected and grew as many as 300 cultivars, representing 99 species of vegetables and herbs, during his 15 year retirement at Monticello. However, did you know that one of the experimental vegetables that he grew has a Texas connection?

Around 1812, Capt. Samuel Brown, who was stationed in San Antonio, sent Jefferson seeds of a bird pepper, Capsicum annuum var. glabriusculum. According to the seed packet from Monticello, Capt. Brown said that the dried peppers were as “essential to my health as salt itself.” He went on to say “The Spaniards use it in fine Powder & seldom eat anything without it. The Americans…make a pickle of the green Pods with Salt & Vinegar which they use with Lettuce, Rice, Fish, etc.”

Jefferson planted what he called “Capsicum Techas” in pots at Monticello and hoped it would be a hardy variety of pepper at his home. He also sent the seeds to a Philadelphia nurseryman, Bernard McMahon, who sold it as an ornamental pepper in Pennsylvania. Food historian William Woys Weaver said that “Old Philadelphians used the potted peppers as a winter table ornament or as window sill plants. The peppers themselves were used to make pepper vinegar, pepper sauce, or pickles.”

Though Jefferson called the pepper “Capsicum Techas,” like many plants it has several common names. One of the common names for the pepper is McMahon’s Texas Bird Pepper, but it also goes under the names of Pequin, Tepin, Petin, Chiltepin, Bird’s Eye Pepper, and Turkey Pepper. The Aztecs called it “chilli” and many people know it by another common name, Chili pequin.

Texas Bird Pepper is the only pepper native to North America. In fact, it is considered to be the official wild pepper of Texas. It gets its name “bird pepper” from the fact that birds, who are not sensitive to the extremely hot taste of capsaicin, love to eat the fruits, which are high in Vitamins A and C. The birds then distribute the seeds through their droppings. 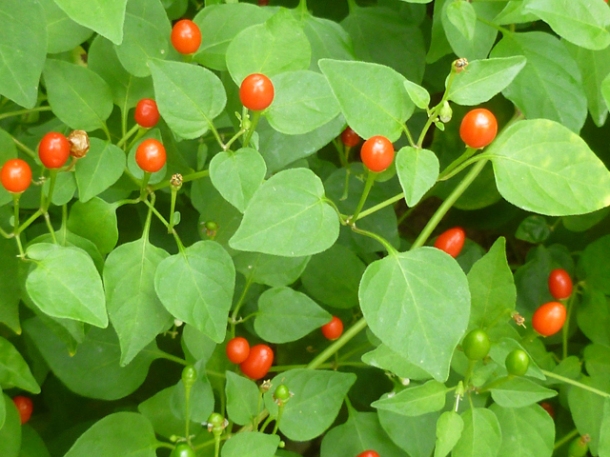 The plant itself is about 12 inches tall and has a compact shape with bright green pointed leaves. The tiny (about ¼”), sparkling round or bullet-shaped red fruits were described by Jefferson as “minutissimum.” But don’t let their miniscule size fool you. They are hot! Very hot! Often 7-8 times hotter on the Scoville Scale than jalapenos’ 30,000-60,000 units.

Though the peppers originated in Central America and are considered reliably perennial in plant hardiness zones 9 through 11, here in Dallas they will often freeze to the ground but come back from the roots once the temperature warms. Because of their ornamental look, they also make a good container plants and can be protected in a greenhouse during the winter. Unlike many peppers that require full sun, Texas Bird Peppers also do well in part shade, though they do get a little leggy. They have few diseases, are drought tolerant, and need little fertility.

They can be used in any recipe requiring hot peppers—but remember to add just one or two little peppers, as their heat can go a long way. One of the most popular uses for the peppers is to make pepper vinegar. The commercial hot sauce brand Cholula lists bird peppers as one of its ingredients. Recipes for pepper vinegar can be easily found on the internet.

So, if you are looking for a very pretty plant with an interesting history, remember the Texas Bird Pepper. Just don’t forget: they are hot!

Chili Pequin is beckoning butterflies at The Raincatcher’s Garden. We have two!