One of the most fascinating aspects of being a gardener is learning about the history of certain plants that are growing in the garden.   Our DemonstrationGarden has many plants that have long and interesting pasts.  From the Garden’s “vegetable lambs” (a.k.a. cotton) to the fascinating stories behind many of the herbs, the Garden provides a mini-history lesson to the school children who visit.

Around 10,000 BC three grass species are thought to have crossed, giving rise to the plant we now call “wheat.”  Archeologists have found evidence of wheat in pits and caves used by humans as far back as 8000 BC.   By 6700 BC Stone Age man was using stone tools to grind the wheat into flour.  In fact, it is postulated that the “domestication” of wheat and other cereal crops might have been responsible for turning ancient nomadic hunter-gatherer communities into agrarian, stationary societies.  By 5000 years ago many civilizations grew wheat as a major crop.  The Egyptians were the first to make loaves of bread rise, possibly as a result of using beer, rather than water, as the liquid while making their bread.  Wheat bread was so important in Egyptian culture that in the tombs their dead were provided with miniature granaries to provide food for the afterlife.  An Egyptian museum even displays a loaf of bread found in one of the tombs.   This gives a whole new meaning to the words “stale bread.”

For the past three to four years, the Demonstration Garden has grown a crop of wheat.  There are two different types of wheat:  fall wheat and spring wheat.  For years, the Garden’s wheat seeds (the name of the variety is unknown) were planted in a long raised bed in the spring.  However, few wheat stalks made it to maturity.  So, after talking to Fred Burrell, who was the County Extension agent at the time, in 2012 the seeds were broadcasted in the fall about 1”-2” apart and about 1”-2” deep in the raised bed.   Judging from the plants, 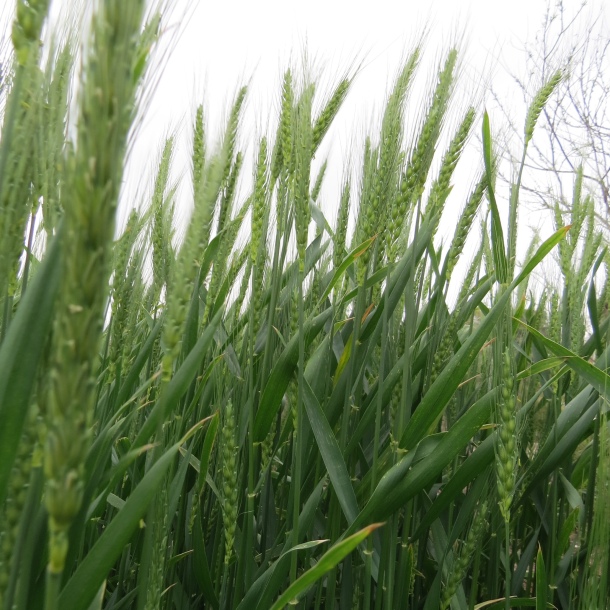 it looks as if a good crop of mature wheat will be obtained this year.  By late summer the stalks will turn golden and be harvested.

Until now, the Garden’s wheat crop has been used primarily for educational purposes to show school children an actual wheat plant.  In the past, the few wheat stalks that made it to maturity were cut and used for decoration.  However, at some point, it is hoped that enough wheat can be grown to actually produce a loaf of bread (or maybe a mini-muffin, since it takes about 10 square feet of planted wheat to make one small loaf of bread).

If you would like to find out more information on growing your own wheat to make bread, there are several articles on the internet describing the process.  Mother Earth News  has a detailed article on how to go about planting, reaping, threshing, winnowing, and turning the wheat into flour.  Growing your own wheat to make bread isn’t as easy as buying a loaf at the store, but it certainly makes one appreciate what our ancestors and even some people today still do to obtain wheat flour.  So, as you are eating your morning toast, think about the history of wheat as an important food crop.  And, if you have ever grown your own wheat for bread, we would love to hear from you.