Many people associate the arrival of fall by the appearance of red, gold, and yellow leaves on trees or seeing groups of pumpkins suddenly pop up on people’s front porches.  However for those of us who have native trees/shrubs, fall also means seeing the clusters of purple berries on our American Beautyberry. 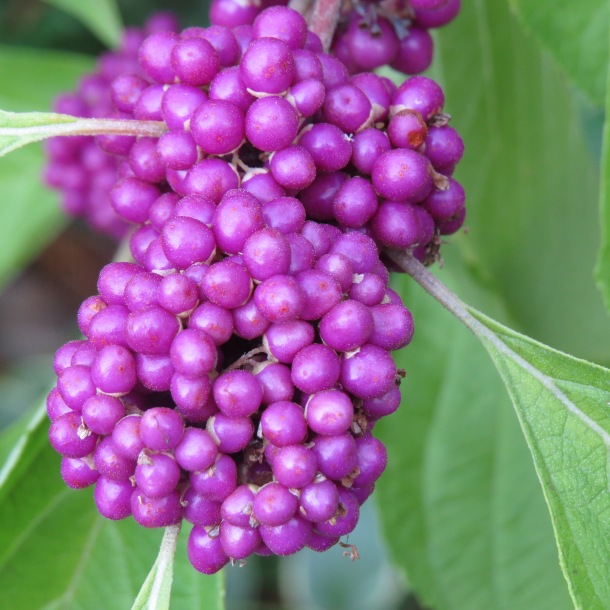 American Beautyberry grows best in partial sun and often used as an understory tree.  Found growing wild in East Texas thickets, this deciduous, 4-6 foot shrub or small tree has small, unspectacular greenish-white flowers in the spring, but is known for its showy clusters of purple berries in the fall.

It prefers moist soils but can be grown in the sun with supplemental watering; and it is tolerant of various soil types.  Aggie-Horticulture suggests pruning its long, arching branches back by 1/2 in the winter if a more compact shrub is desired.  Most Beautyberries have purple berry clusters; however there is a white-berried variety, C. americana var. lactea.  The Demonstration Garden grows a Mexican variety called Callicarpa acuminate ‘Texas Maroon”  which has maroon berries.

There is some controversy about whether the berries are toxic to humans.  Several sites say that unripe berries should never be eaten.  Native Americans used the roots of Beautyberry as a diuretic, the leaves for dropsy, and a tea made from the roots and berries for colic.  The leaves and roots were used in sweat baths for the treatment of malaria, rheumatism and fevers.  The leaves themselves can be rubbed on the skin as an external mosquito repellent.  Some sites however, including Aggie-Horticulture  say that jelly made from ripe Beautyberries is excellent.  However, as with many plants that are foraged from the wild, “diner beware.”

There is no controversy however that ripe Beautyberries are one of wildlife’s favorite foods.  In my own yard, I only able to enjoy seeing the ripe purple berries for about a week before the mockingbirds have eaten every berry off of my large tree.  Green Dean, who writes about foraging for wild edibles, reports that the Beautyberry is a squirrel’s version of take out.  Other birds that enjoy eating the berries are robins, catbirds, cardinals, mockingbirds, brown thrashers, and finches.

So, if you want a shrub/small tree that will provide fall color and feed the wildlife (and perhaps you too), think about planting an American Beautyberry.  You won’t be disappointed.